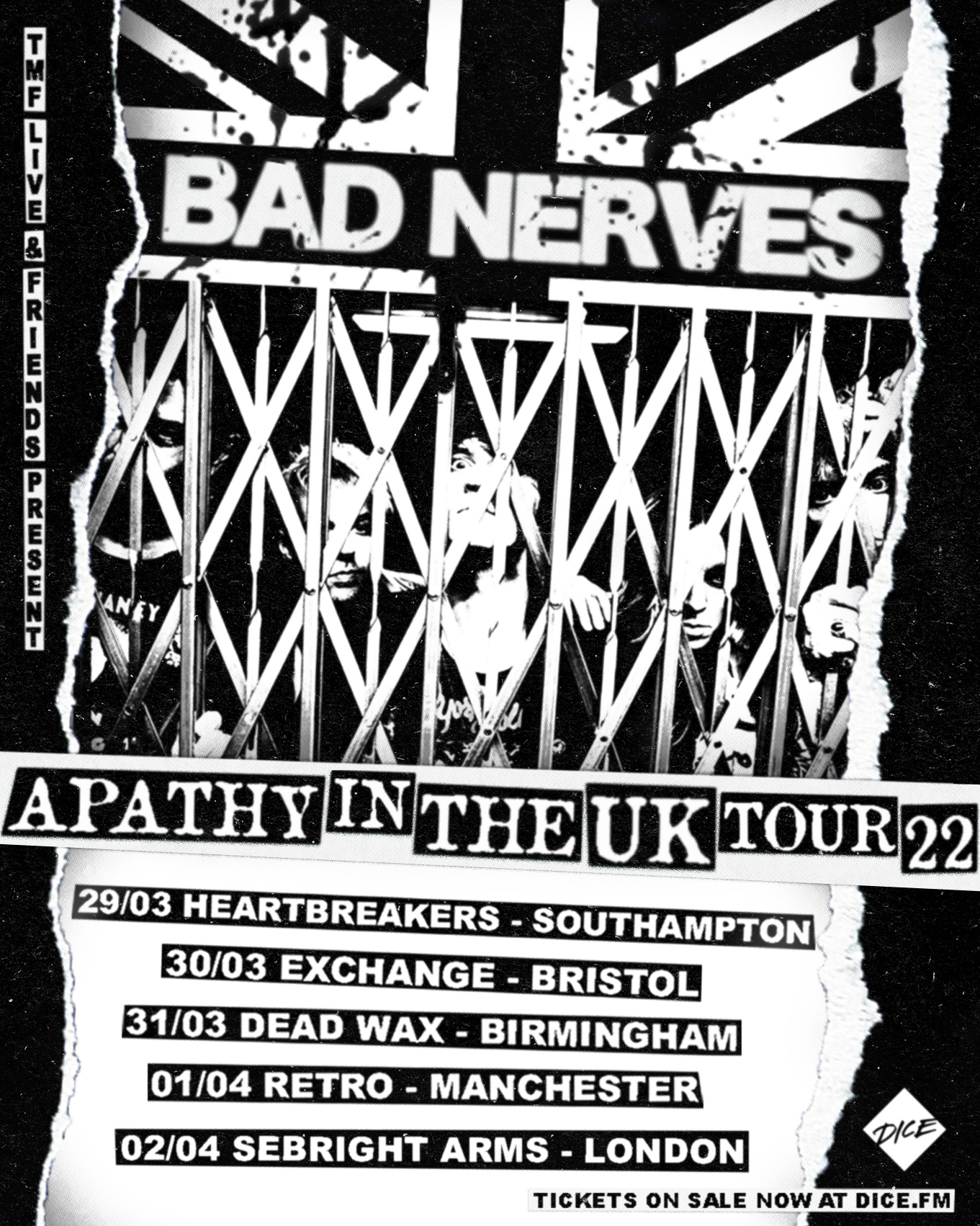 Dubbed the ‘crowned princes of power pop’ by Radio 1’s Dan P. Carter, Bad Nerves are setting the standard for adrenaline-fuelled pop-rock with their new single ‘Alright’. The bastard son of a Ramones/Strokes one night stand and labelled the ‘100-miles-an-hour Supergrass’ by BBC London’s Gary Crowley, Bad Nerves also head out on their headline UK tour, Apathy in the UK.

‘Alright’ is the feel-good hit of the winter and about staying positive and looking on the bright side.

“You gotta have bad times to appreciate the good times. One can’t exist without the other,” explains frontman Bobby Nerves. “Even the impending apocalypse we’re facing will be one hell of a light show when it all goes up in flames. What a way to go. My hope is that people will hear this song and feel better about themselves, even if it’s just for 2 minutes and 37 seconds.”

The Essex group drew acclaim with their debut album and previous singles ‘Dreaming’, ‘Radio Punk’, and ‘Can’t Be Mine’, catching the attention of Dan P Carter, Clara Amfo, Huw Stehpens, Phil Taggart and Annie Mac– who made ‘Can’t Be Mine’ one of her coveted ‘New Names’ picks. ‘Don’t Stop’ was also made Radio 1’s ‘Rockest Record’ and picked by Classic Rock as one of their tracks of the week. Bad Nerves were named Amazon’s Best New Band in January 2022, and received major DSP support from Spotify, Amazon and Apple for their latest single ‘Don’t Stop’.

Bad Nerves head out on their headline UK tour on 29th March. All info can be found here

Bad Nerves are a 5-piece Powerpop-RocknRoll band from Essex. The bastard child of a Ramones/Strokes one night stand, they play ferociously fast distorted pop songs, with melodies that hook so deep, even the most skilled lobotomist would struggle to scrape them out.

In response to a worldwide delay in touring the band set about finishing off their debut self-titled record. Bad Nerves’ self-produced, self-funded record was released in October 2020 via Killing Moon records (UK/ROW) Suburban records (Europe). The band kicked off 2020 with a performance to Europe’s top festival bookers at Eurosonic. Since then, the record has been building with support from the likes of BBC Radio 1 (Dan P, Annie Mac, Jack Saunders) and Spotify’s Head of Rock Alison Hagendorf. With fans growing week by week, the band kicked off the resumption of live music with an explosive performance at Reading and Leeds festivals. They recently returned from four back-to-back sold out headline shows in the Netherlands and straight onto a UK support run with Brighton’s renowned Tigercub.

‘Alright’ is set for release in March 2022, with a live Maida Vale EP to follow shortly after. The band will be recording their much anticipated second album in April. Bad Nerves also played a live stream event for Rock Scene presents (powered by Amazon) via Twitch TV which kick-started their album campaign.

With more new music on the horizon and a string of live dates booked across Europe, Bad Nerves are set to take their fresh brand of Powerpop-RocknRoll to new fans in 2022 and beyond!