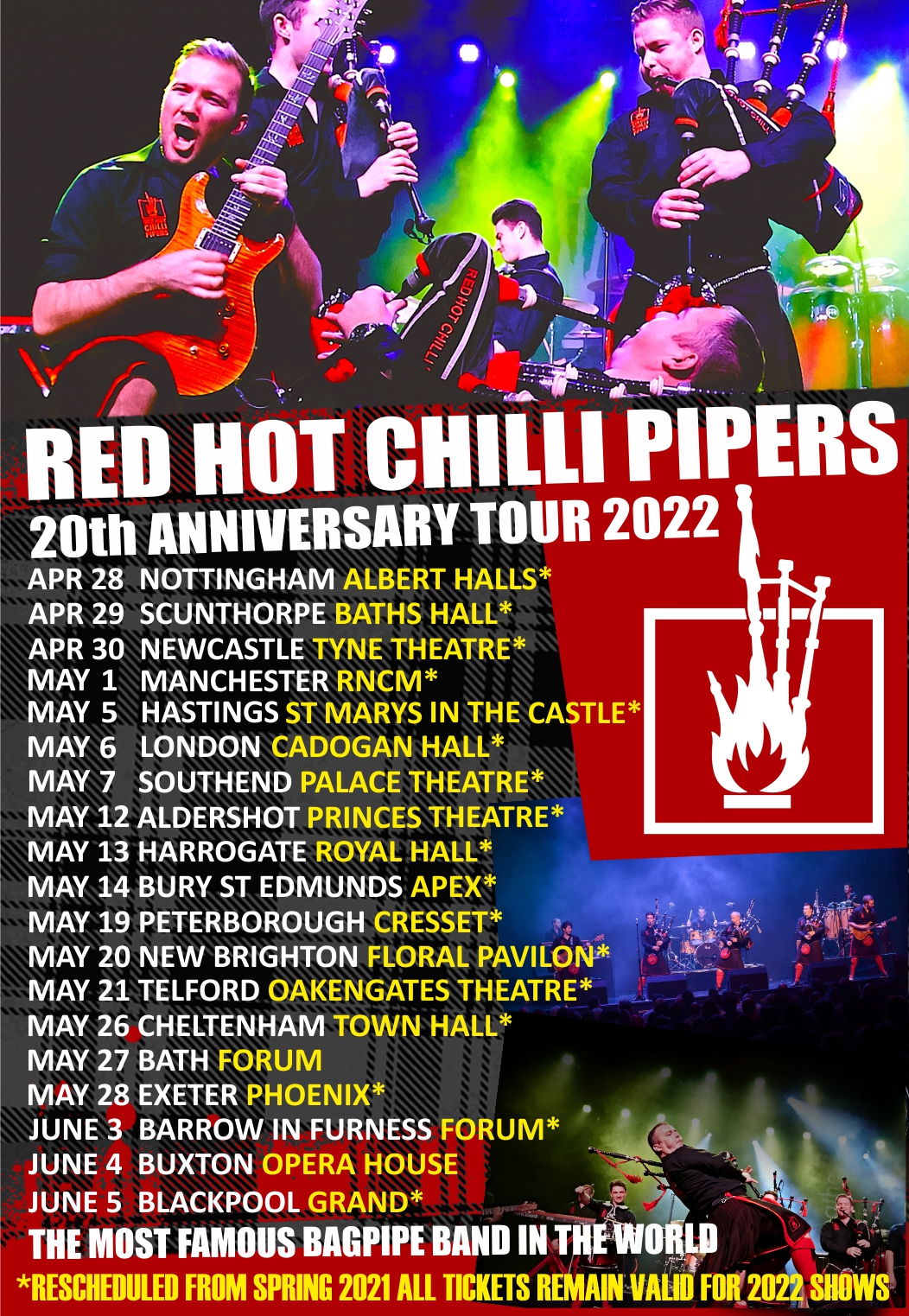 There has never been anything quite like The Red Hot Chilli Pipers, from their formation in 2002 and a cameo appearance at T in the Park in 2004 with the Darkness to opening the main stage in their own right in 2014. The past fifteen years has seen the Red Hot Chilli Pipers become the most famous bagpipe band on the planet…ever!

The band’s achievements have reached incredible heights with their groundbreaking fusion of traditional Scottish music and rock/pop Anthems which they proudly call “Bagrock”.  The Red Hot Chilli Pipers are a genuinely unique experience.

The Chillis have never been more in demand for their infectious style of feel good music which appeals right across the age range to people all over the world. They have collected together an impressive group of musicians, dancers and singers from Scotland and further afield, many holding World Championship titles and all seriously good players with impressive credentials and qualifications.

In 2014, The Chilli Pipers released a new live DVD and CD entitled `Live at the Lake`.  In an explosive evening of entertainment captured on this live DVD and CD, The Red Hot Chilli Pipers recorded their most adventurous project to date, bringing 16 musicians and dancers across the Atlantic to perform at Milwaukee Irish Fest, the US spiritual home of the band. They captured the unique and explosive power of  the Chilli Pipers in one unforgettable evening by the shores of Lake Michigan. Tracks include Insomnia, Gimme All Your Lovin’, Thunderstruck, Everybody Dance Now, Amazing Grace, Fix You, Chasing Cars, Wake Me Up, Don’t Stop Believin and We Will Rock You.

In February 2019, the Pipers and Tom Walker released a new version  of his massive hit “Leave a Light On”.  The release is in aid of Nordoff Robins, the music therapy charity and it went straight into the iTunes top five. The collaboration came about after Tom performed with the Red Hot Chilli Pipers at Murrayfield Rugby Stadium before the Scotland v  Italy Six Nations match.

In June 2019, the Red Hot Chilli Pipers released a new studio album, entitled  “Fresh Air”.  An exciting fusion of brand-new songs and carefully selected covers. In a new departure for the Red Hot Chilli Pipers many of the songs include lead vocals.  Some of the highlights are  “Leave the Light On” featuring Tom Walker on vocals. Leonard Cohen´s “Hallalujah” and “Shut Up and Dance” from the American band Walk the Moon, both songs feature the incredibly talented singer Chris Judge on vocals.

Some facts and figures about the Red Hot Chilli Pipers:

To date, The Red Hot Chilli Pipers have performed  live to over 1 million people.

Triple platinum status for the album and DVD – `Blast Live`.

Over 4.5 million views on YouTube of their viral cover of the Avici track `Wake me up`.

Sell out gigs and tours in USA, China, Australia, Germany, Switzerland and Australia.

Winner of the BBC TV prime time talent show `When Will I be Famous` hosted by Graham Norton.

A Big Hearted Scotland nomination for their charity work.