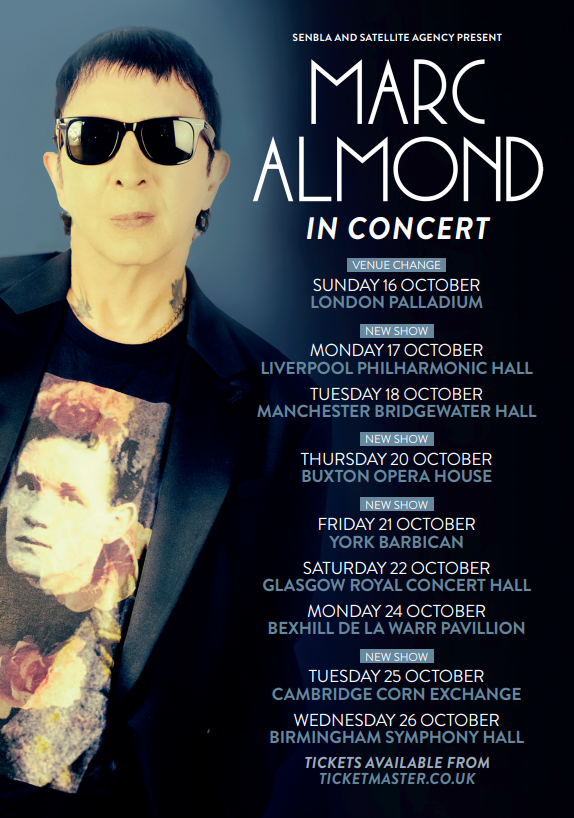 Marc Almond is delighted to announce his rescheduled tour dates for October 2022 adding extra dates in Liverpool, Buxton, York and Cambridge.   Marc added “the fans have been so understanding and patient through the endless rescheduling due to the pandemic but now we have confirmed these dates I can’t wait to get back on stage”.

All the original dates are the same venues with the exception of the London Roundhouse show which is being moved to the London Palladium. All tickets bought from the Roundhouse will be refunded. Tickets bought on Ticketmaster will be automatically transferred to the Palladium show.

Marc will be singing songs from his last top 20 solo album, ‘Chaos and a Dancing Star’, released in March 2020, plus many favourites from his extensive catalogue and his biggest hits. Marc always has surprises up his sleeve.

His last album ‘Chaos and a Dancing Star’ was released to critical acclaim just before the Pandemic and lockdown. Marc was able to perform a one off concert in February 2020 at the Festival Hall with co-writer Producer Chris Braide, joined by guest Ian Anderson of Jethro Tull.

Not only will this be the first outing of his recent solo album, Soft Cell have also released a UK chart top 10 album “Happiness Not Included” including the  much celebrated No.1 single featuring the Pet Shop Boys “Purple Zone”.

Marc Almond’s lauded career, spanning over four decades, has seen him receive an Ivor Novello Inspiration Award in 2013, a Brit Award as well as an OBE in the 2018 New Year Honours for his services to arts and culture.

Having sold over 35 million records worldwide, Marc Almond has enjoyed both critical and commercial success realising decades of chart dominance. Marc has had International singles and albums chart success with Soft Cell and as a solo Artist covering four decades as well as two number one singles. Tainted Love being one of the biggest selling singles worldwide has influenced and inspired a generation of artists and musicians.

Tickets for the rescheduled dates (Manchester, Glasgow, Bexhill and Birmingham) are on-sale now and available from Ticketmaster.

The new dates in Liverpool, Buxton, York, and Cambridge, as well as the London date, will go on-sale on Friday 27th May.

All tickets for the rescheduled shows remain valid except for the London show unless purchased on Ticketmaster.