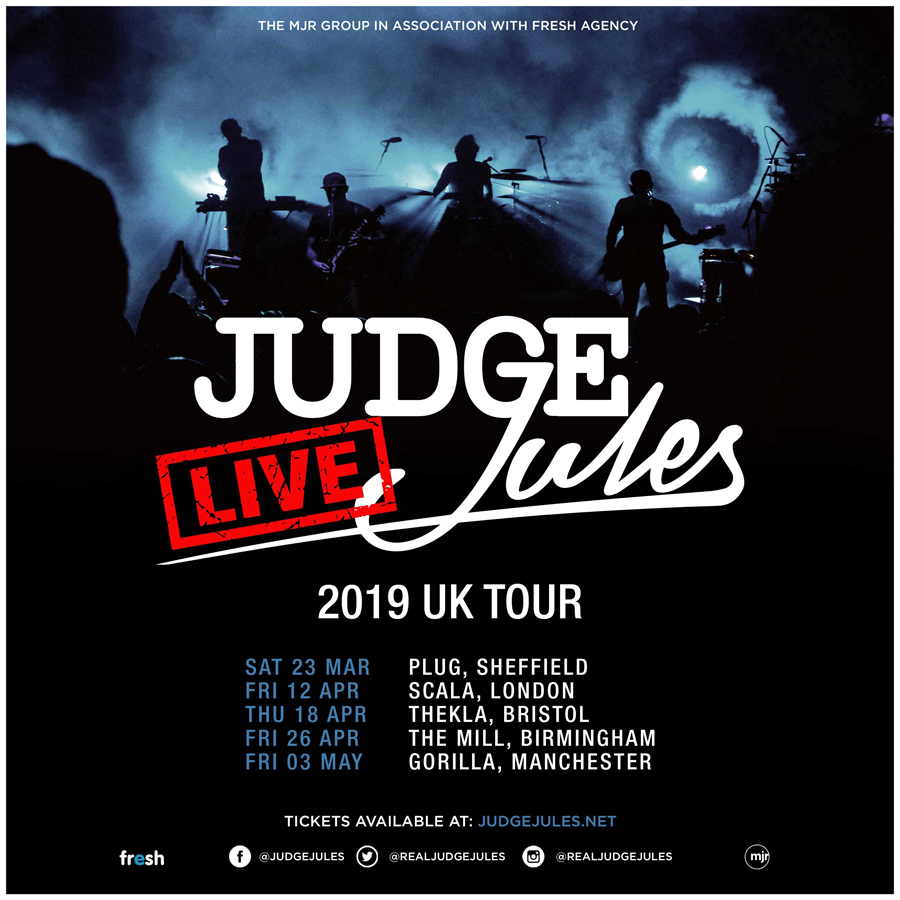 One of the scene’s most best-known names for more than three decades, Judge Jules has never shied away from pushing the boundaries in dance music. In 2019, for the first time ever, audiences will be able to experience the iconic tracks that have defined his career through a ten-piece live band with Judge Jules at the helm. This is Judge Jules: Live.

Jules’s in-depth involvement in many of the recent wave of “classical” dance events, including Gatecrasher, Colours, Club Class and 2019’s Ministry of Sound tour, inspired the decision to take the impact and emotion of the classical shows, but refine the feeling with a wholly new take on live dance music. The first dates will see Jules take the new live show to Sheffield, London, Bristol, Birmingham and Manchester, with more still to be announced.

With complete creative free rein, Jules curated every element of the performance. Each track has been bespoke reinvented and reworked in a style unique to this live show, featuring a full ten-piece band, with brass, percussion, drums, bass guitar, lead guitar, keyboard, singers, and of course Judge Jules himself. A 90-minute show from start to finish, the music has been selected to represent the breadth and scale of his career.

“There is something about music being played live that never fails to send shivers down your spine – it doesn’t matter what the genre is, hearing a track performed by live musicians on stage is something you cannot replicate in the studio, or even on the best nightclub environment. So, I decided to create my own bespoke versions of my all-time favourite records with a specially selected band. It’s taken a long time to put together, but finally we look forward to taking the “Judge Jules Live” tour on the road. This truly is a new take on the ‘live dance music’ phenomenon and the tour bus starts rolling shortly.” – Judge Jules

This is not a show to sit down for – combining the energy of specially-chosen outstanding musicians with his own inimitable presence behind the decks, Jules will take the audience on a tailor-made journey through dance music with vocals, hands-in-the-air moments and plenty of basslines that’ll take you right back to your very first rave.

With audiences demanding more from dance music and newfound focus on a visual as well as a sonic spectacle, Judge Jules Live is a chance for dance fans to lose themselves in the moment with the kind of experience that you just can’t replicate with a solitary DJ.

With the first club dates announced and festival dates to be announced, Judge Jules Live will be an exciting addition to live music in 2019.